» Global X-perience » The power of empathy, or why CEOs should break rocks

The power of empathy, or why CEOs should break rocks

The power of empathy has caught us by surprise. In an age of information overload, we stumbled on it very nearly by mistake. Originally, my NGO offered a single empathetic “experience”, simulating poverty, as a one-off. That was a decade ago and we have been running them ever since, at the insistence of our stakeholders.

We have become convinced that, to engage with global challenges, people seem to want more than presentations, graphs or charts. They want empathy.

The journey began for us when we were preparing for our ten year anniversary. What would happen, we wondered, if, instead of an elegant meal in a hotel setting, we invited CEOs to spend 24 hours living on the wrong side of the Millenium Development Goals?

No phones, no wallets

The CEOs arrived and we stripped them of their cell phones, wallets and other appendages. We replaced those with a pile of old wood, corrugated iron and plastic sheeting and invited them to build a shelter for the night. They struggled somewhat but, after a couple of hours, a set of tiny homes, much like the slum communities we routinely serve, was more or less standing.

Afterwards, our corporate guests ate a meal which, according to African colleagues, typified food in the slum communities of their region. Then the participants went to bed, sleeping on the hard ground under their newly made structures.

Next day, they went through a series of simulations. They broke rocks with their bare hands to build a simple “road”. They struggled to generate income for their “families”, seeking to pay for education, food and rent by manual labour, battling loan sharks to get by. They met corruption in the marketplace, red-faced, at times, with frustration. “I am used to calling the shots in my company,” one told us later. “I am not used to being in a place where I am disempowered.”

Afterwards, slumped in the doorways of their “homes”, they debriefed: an insightful time, given that they were among the shapers of Hong Kong’s sophisticated economy. They now found themselves looking at that same financial landscape through another’s eyes, the more so as they looked for solutions that they could help execute, given their influence.

When the day was done, we packed up, with no intention of repeating the programme. Participants, however, took us aside. “Don’t stop doing this,” they said, with surprising earnestness. “Never, in our Corporate Social Responsibility programmes, have we experienced anything so powerful.” We couldn’t, at first, understand their insistence. In the weeks following, though, our phones rang off the hook and our email boxes overflowed with requests for a variety of simulations. Today, ten years later, over 130,000 participants have taken part. It took us a while but, in time, the reality dawned. We were looking at the power of empathy.

Why does empathy work?

What is it about empathy that works? And why is the simulation process different in impact, than, say, a documentary, a talk or a discussion group in producing empathy?

The old adage probably says it best: “I can’t understand a man until I walk a mile in his shoes.” Experts say that sympathy, while of value, can keep people at arm’s length. Empathy, on the other hand, allows them to see another’s world view and, more importantly, to feel something of it.

As one CEO told us: “This takes it from hearing to being.” Another added: “Reading 1000 books would not have taught me what I learned in the past hour.” And another told us: “I spent three months working alongside people in a slum community, but I never saw life from their end, only my end. That changed today.”

So empathy is powerful. Yet, we’ve found, there is a lot to learn regarding empathy and simulation.

The limits of simulation

One of our greatest challenges is how we represent, in microcosm, the issues facing our world, in macrocosm. We can’t possibly offer a mile in another’s shoes. We can offer just a very few steps.

With many participants asking for a one or two-hour programme, how can we show the complexity of global need and the depth of struggle for which we long to generate empathy?

The other difficulty we face is the fact that, while people ask us to simulate a wide variety of needs, we ourselves have not lived with all of these issues, first-hand. How, then, can we portray them accurately? Like any other form of communication – movies, documentaries, living museums, speeches or written papers – we are painfully aware that simulation tools may fail to give a realistic representation of people in need.

In dealing with both these challenges, two imperatives have become critical to us. Firstly, we rely heavily on the guidance of people who have themselves lived with the issue we are addressing. Secondly, we work with NGOs and others who serve people facing the topic at hand.

From empathy to action

Does empathy ultimately lead to action? For us, that question has been a critical piece in this journey.

We faced CEOs, following the Refugee Run at the World Economic Forum in Davos last year, who unashamedly wiped a quiet tear and asked, “What now? How can I, and my company, make a difference?” We were not really ready for that question. We’d had no wish to make an ask of people following a simulation. It was privilege enough, from our perspective, that they were willing to have a taste of the pain and despair that millions live with daily.

Yet their response, and that of thousands of others, has shown us that empathy can be depressing if participants have no platform for action, should they wish it. Without that, they are left simply with the pain. We have discovered that empathy, in our context, must be linked to opportunity.

Not all participants want to get involved, and that is fine. Over time, though, we have seen some choose a deep level of engagement in the years following their simulation. For some, this has prompted change in their corporate responsibility policy or practice. For some, it has fostered a different modus operandi for those whose presence, in developing nations, could better benefit local communities. For those at the Forum, in 2014, it allowed participants to stand behind thousands of Syrian refugee children given schooling. Beyond the corporate world, we have also seen simulations birth NGOs, projects and deepened engagement in the community, at both adult and student level.

We have a distance to go in our empathy journey. Since we began, we have had to develop more programmes on HIV/AIDS, war, the environment, water shortages, hunger, blindness/poverty, hunger, the balance of trade and, currently, disasters. More issues are being requested.

What keeps us going? We have a simple goal. We want to see a dysfunctional world understood, cared for and, where possible, changed, one participant at a time. That can’t, we believe, happen without empathy.

Written by Sally Begbie, Director and Founder of Crossroads Foundation.

This article was published in collaboration with the World Economic Forum Agenda Blog. 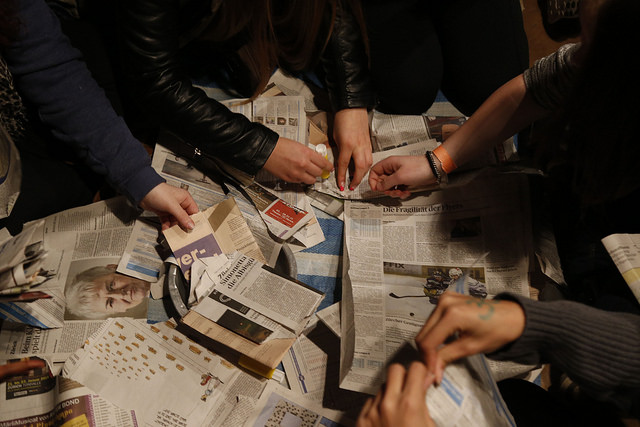