Crossroads continues to partner with NGOs working on the ground in refugee camps along the Syrian borders. You can help Syrian children this coming winter!

Update: As the situation develops, donations received after Christmas will be used to support Syrian refugees in a multitude of ways beyond provisioning for winter kits. Crossroads is committed to assisting Syrian refugees across Lebanon, Jordan and Europe in whatever way is possible.

Many of you have been in touch in the wake of the recent devastating footage of Syrian refugees in the news. We are continuing our campaign to support Syrian refugees. Last winter with your help, we were able to keep 5,290 children warm. As the number of refugees increase, we need your help to increase our support. 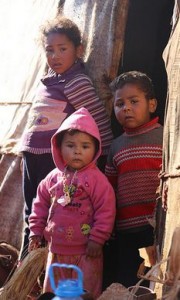 “We have only a narrow opportunity to intervene now as this potentially lost generation confronts its future”, warns UNHCR High Commissioner Antonio Guterres. “Abandoning refugees to hopelessness only exposes them to even greater suffering, exploitation and dangerous abuse”. The Syrian crisis is impacting millions of families. Four million Syrians have now fled across the border, and a further 7.6 million are displaced within Syria. Over half of those uprooted are children.

The last two winters, you helped Crossroads send winter kits of warm clothing and toys to children in refugee camps and settlements in the Middle East. We are continuing this appeal for the upcoming winter, as well as working to support Syrian refugees across Europe. Major aid programmes have seen cuts to their food distribution and as the number of refugees increase, our response needs to match.

If you donate, take a photo of yourself with a written message to show Syrian children that you care. Post it on our Facebook page and we’ll share it with the children who receive winter kits!

Scroll down to view winter kits distributed by Crossroads Foundation for previous winters. 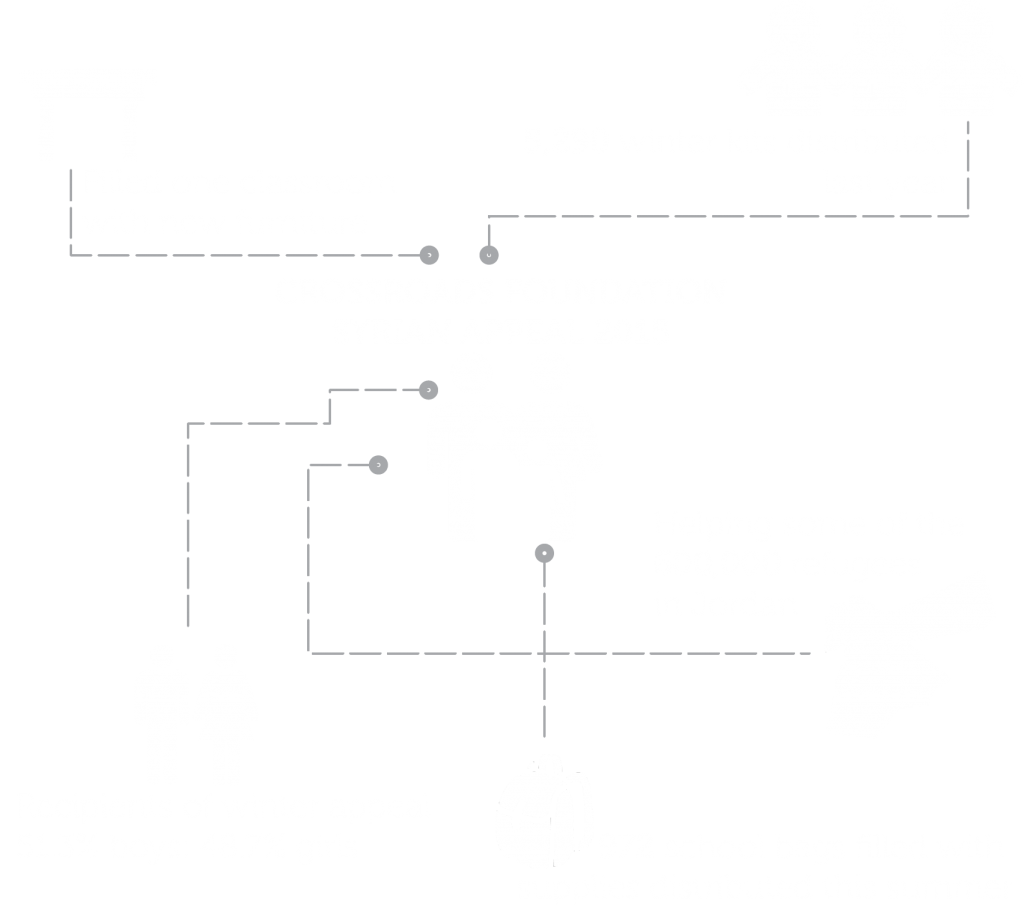 How do I give?

One of the ways we are helping this winter, is through the gift of winter kits. You can be a part of bringing hope to children in refugee camps by giving towards our Syrian refugee appeal. A winter kit for one child costs HK$150 and includes: 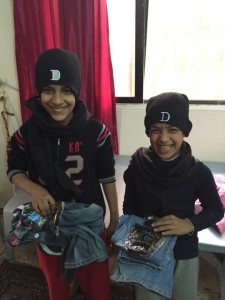 Fatima was forced to flee, when she was just 10 years old. Her home in Syria was no longer safe, and with her three older brothers, and mother, they found refuge in a town in Azraq, in the east of Jordan. Finally finding safety, the stress was not over for this 10 year old girl.

In a town, where the population has almost doubled in the past three years, there are simply not enough resources, to support the influx of 8,000 Syrian refugees. Her family lived together in a makeshift shelter and Fatima was unable to attend school. Proud to show her school certificates from Syria, the lack of space and stretched resources in Azraq meant, she would not be able to enrol. After a few months, Fatima began suffering from depression, anxiety and even her hair started to fall out!

With an estimated 3 out of 5 children, out of school, our partner NGOs made a plan. Working with Syrian refugees in Jordan, they soon established a ‘catch-up school’ to help children, like Fatima, get back to school again. Through the generosity of Hong Kong, Crossroads was able to support the school with backpacks and crucial school supplies, to 972 children in the region.

Since joining this school, Fatima, soon bounced back to her lively self and thankfully, so did her hair!

Shoes all lined up, ready to be given to Syrian refugee children. These were donated through funds raised for our 2014-2015 appeal.

Syrian refugee children wearing their new winter clothing. These were donated through funds raised for our 2014-2015 appeal.

Syrian refugee children wearing their new winter clothing. These were donated through funds raised for our 2014-2015 appeal.

More than 3 million Syrians have now fled the bloody conflict that has ravaged the nation for nearly 3 years. Thousands of those are currently living in refugee camps or informal settlements in neighbouring Jordan and Lebanon where conditions are bleak and the needs are huge.

In Lebanon, Syrian refugees live in ‘informal tented settlements’ rather than ‘refugee camps’. It’s an important distinction, and one that means much formal infrastructure is lacking. Paved or cemented roads are not allowed. “Everywhere is marked with mud,” said Crossroads’ David Begbie after visiting with refugee families.

When her husband divorced her while living in a Lebanon tent settlement, this mother of six was forced to find a new tent to call home. Many refugee families deal with unresolved trauma and stress after witnessing the horrors of war.

Young girls in the settlements and camps are considered by aid workers to be at high risk of abuse and exploitation. Sex work is an easy way to make money for the family. “Young girls come up to me at night and say, ‘give me $10 and just tell me what to do, I’ll do it,’ said one Lebanon taxi driver of desperate Syrian refugee girls. “I just give them $5 and tell them to leave.”

“Winter is already an extremely difficult period for Syrian refugees, but the suspension of food assistance at this critical juncture is going to be devastating.

Temperatures in this Lebanon settlement approached freezing, but without proper warm clothes and electricity, or money for fuel, many refugees face a cold that is literally life-threatening, especially for children.

“Rebels came in the middle of the night and said, ‘join us or die’,” said Muhammad, a refugee speaking with Crossroads’ David Begbie. The rebels beat him savagely and destroyed his home – his shoulder still bears scars from the attack. Fearing for his life, Muhammad fled Syria in the night with his pregnant wife and three young children. They arrived at this tent settlement in Lebanon’s Bekaa Valley, carrying deep trauma and uncertain of their future.

To survive in the settlement, Muhammad now collects plastic from around the muddy streets in his makeshift cart. “A lot of these people came with some money,” says Crossroads’ David Begbie, “but they’ve been living off their savings and most of their money is now gone.” Most bring skills and ingenuity with them across the border, but aren’t permitted to take formal jobs in the community, so they do what they can to earn enough to survive and rely on outside help.

Muhammad’s children look out from their new home.

While some children are able to attend camp schools run by NGOs, others need or choose to work to bring in extra income for the family. From manual odd jobs to prostitution to transporting drugs in and out of the camps, the work keeps them out of the classroom at a crucial stage of life. “More than half of these refugees are children. Altogether, 6.5 million children are affected by the crisis.” UNICEF, September 2014

In January 2014, Crossroads’ partnership with Harrow International School Hong Kong saw funds release thousands of packs to hand out to children in need. Distribution day was a bright spot in an otherwise difficult daily struggle for survival. Teenagers ripe with potential, like this young man, have had their education interrupted. Many will never finish the high school education they started, despite being bright and ready to learn.

Beneficiaries of the Harrow/Crossroads fundraising and distribution. “We moved from Syria because there was no food left. There was nothing to buy,” says this former farmer in Jordan’s Za’atari camp. “The war started coming near so we walked across the border.” Today, his family of 9 lives in this one-room hut where at night, they sleep together on the floor on donated mattresses.

The community of Harrow International School, Hong Kong, raised enough money to help distribute 5,000 kits of warm clothing and toys to Syrian refugee children in camps and settlements. With their pack, each refugee child received a photo message from a supporter around the world – many of them children – telling them that they’re cared for, and not forgotten. More than ever, we need to another appeal this winter.

“I wish you could have been there to see the distribution!” said one aid worker. “It was like drawing a smile on the children’s faces.” Younger children received not just warm clothes but a soft plush toy in the distribution by Crossroads’ partners. For some of them it’s the only toy they now own.

In Za’atari refugee camp, Jordan, they call this child-safe space ‘Dreamland’. Managed by NGO Mercy Corps, it’s a section of the camp set aside exclusively for children.

In ‘Dreamland’, a child-safe space equipped with swings, a learning centre and teachers who care, children can reclaim a little of the childhood stolen from them.

This safe haven, guarded against adults and older children entering, is a place where children are empowered to play, learn and imagine a better future than what they see in the dusty, bleak camps.