“In natural crises, human beings forget for a while… their prejudices. For a little while neighbours help neighbours and strangers help strangers.”

Those words, from the inspirational, late Maya Angelou, described exactly how the world responded to Nepal’s harrowing experiences in April, 2015. Crossroads did too, locally and internationally.

Through Global Distribution, we rushed aid via plane two to three times per week over the period immediately following the earthquake, after which we shipped further supplies. Through Global Hand, we arranged ‘matches’ between donors in all parts of the world and partners inside Nepal and provided consultancy support, daily, for donors over the following three months. We provided 3 tons of emergency recovery kits, 600 tents, 2000 sleeping mats, 1.5 tons of bedding and linen, 3 tons of clothing, thousands of face masks and gloves for those sorting through rubble, hundreds of cooking utensils and thousands of water purification tablets.

We were also donated funds by Hong Kong people with which we were able to provide 36, 000 meals (lentils, noodles, oil, salt), provide temporary shelters, pay for housing reconstruction, transport solar lamps, and provide large tents for use as food distribution and reconstruction co-ordination centres.

View our response through the slideshow below.

One of our partners in earthquake relief was a former student in HK named Pankaj. A Nepali himself, Pankaj undertook our simulation x-perience on poverty, which deepened his empathy for the poor. He went on to co-found the NGO Institution for Suitable Actions for Prosperity (ISAP), which actively helped following the earthquake (photo below). We channeled some of our Nepal Appeal funds to ISAP, who used them to provide emergency shelters and relief materials, and to help develop more resilient housing for the community. 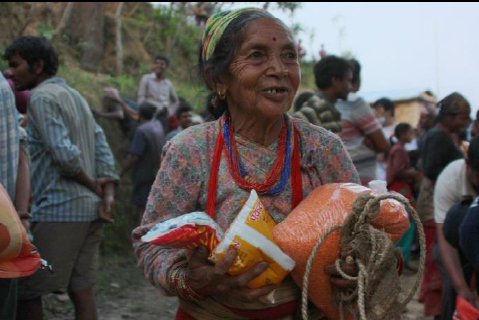 The Hong Kong community gathered thousands of emergency supplies which were rushed to Nepal. We sent over 3 tons of emergency kits.

Hong Kong people turned up in droves, wonderfully, to help us rush aid to Nepal.

Large number of affected Nepali residents came to receive aid facilitated through our partners in the area.

Some of our efforts went towards the immediate rescue stage. Others contributed to shelter, both short and longer term.

Krishna, (with notebook) a Nepali living in the UK, selflessly gave months of effort to coordinating aid, including many goods provided through Global Hand.